A Stitch In Time Saves Nine 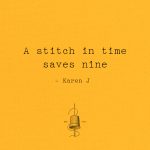 Dealing with a problem right away will prevent it from getting worse and more difficult to deal with later, there is nothing like the now!

Some say that “A stitch in time” was first said by mothers weary of mending their children’s clothes, and mending a tear right away would require only 1 stitch instead of 10 stitches later. Others that making 1 wrong stitch whist embroidering can mean unpicking a whole section later.

Embroidery has been around since 3rd Century BC with the earliest examples found in China. You may have thought that embroidering was something Elizabeth Bennet did in Pride and Prejudice to while away the hours whilst waiting for Mr Darcy to sweep her off her feet, but the art of embroidery is enjoying a huge renaissance, with global designers such as Erdem using embroidery to create the most beautiful floral designs on his pieces, every high street retailers embroidered bomber jackets flying out of the doors, and this season Valentinos legendary Rockstud bag has been embroidered with a Jungle print. 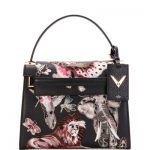 At SEAMS this week we are looking after hand sewing the creations for London Fashion Week and I know there are going to be many fabulous embroidered pieces on the catwalk.

There are many reasons to sew there is nothing like creating something timeless with a personal touch.

Type embroidery into Google today and you will find embroidery groups and courses springing up everywhere. There are Facebook groups where you can chat to Romanian Grandmothers who will show you their country’s traditional techniques, and clubs you can go along to socialise and swap tips. Embroidery has come back in fashion in a big way Gwen Stephani loves to sew and says she learnt the craft from her mother and grandmother. Britney Spears has tweeted herself having sewing lessons from her wardrobe mistress. Chris Martin from ColdPlay says he and his band members love to sewing their own clothes. Julia Roberts has been taking sewing lessons to keep her brain active as she grows older. George Clooney once made his own clothes and stepped in to fix a broken zipper on his girlfriends dress backstage at The Academy Awards.

Rumour has it that Judy Dench creates the most ornate and beautiful pieces of embroidery but of the most foul language and them gives them to people as gifts!

It was my love of sewing that lead me to create SEAMS Hand Cream, knowing from first hand experience the problems that this addictive craft can cause. From pin-pricks and burns to dry, sore and aching hands we needed a hand cream that could be used whilst working as a sewer never wants to stop! That is why SEAMS has a special fast dry formula and doesn’t transmit grease onto fabric. Moisturised hands really do ‘feel’ the material better.

With your skin ‘a stitch in time saves nine” is so true, meaning it is better to smooth on SEAMS before and during everything you do than to try to repair damaged skin afterwards.

Keep your hands soft and beautiful with SEAMS 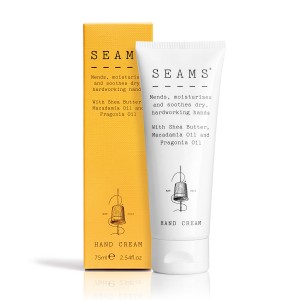